People always ask me what it takes to be successful on assignment after assignment. I suppose that I’ve had a good run lately. I’ll tell you right now that it is based on your ability to innovate solutions that end up in a company gaining competitive advantage. As AX practitioners we can never stop striving for that because we are in the business of implementing a powerful ERP system where our success is directly measured by corporate productivity. To do this entails finding new and innovative ways to utilize AX, such as SharePoint integrated Reporting. Yes, by the time you finish reading this, you would have learned how to install AX within SharePoint integrated mode, which is rare and very valuable. But more importantly, don’t lose track of the significance of enabling an organization to harness the awesome functionality of SharePoint within Dynamics AX. It’s a game changer for so many reasons. So, let’s complete the series.

First, Add a Report Library APP to your SharePoint Site which doesn’t have AX installed yet

Within your site, let’s add a Report Library App. Normally, you would add your bus connector account here, but it is already a site administrator so that won’t do anything in this case. Note, you don’t have to add a report library App; it could be a document library. But I like the report library app when I’m storing SSRS reports because of some of the default, out-of-the-box options.

Second, run the Dynamics AX installation CD on the computer(s) that has SharePoint Server running on it

Run the Dynamics AX CD on the computer that is running SSRS which is the SharePoint Server in this case. Hopefully, you have done a custom install and you are installing your AX components in pieces (or suffering will come later). In this case, it is time to install the Reporting Services Extensions. 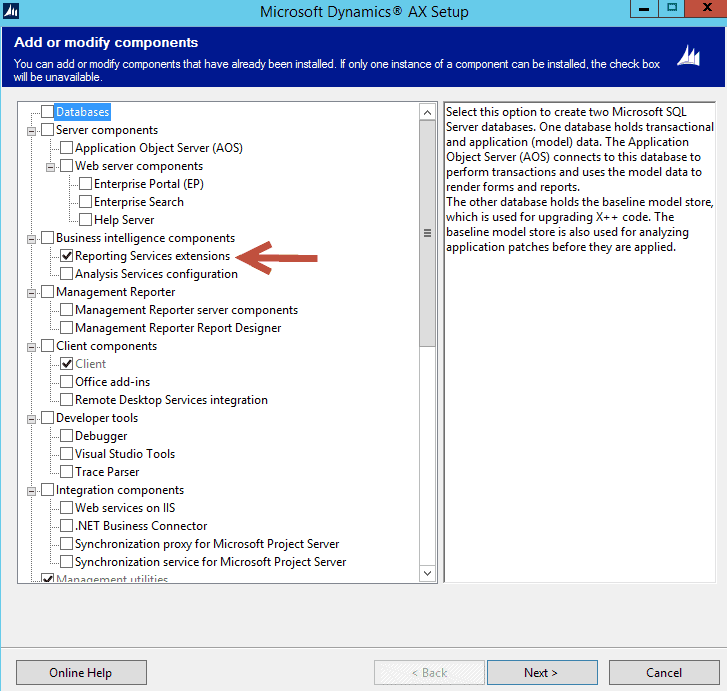 Third, map your site that you created earlier to the site URL for Dynamics AX to do its business of installing Reporting Extensions

Now, notice how the Dynamics AX CD just works when you install SharePoint the way I told you to do it. It avoids all those headaches that I often see where implementations are spending weeks on end trying to get this to work. I’m not saying that there won’t be difficulties. I’m just saying that a lot of those difficulties can be avoided by starting simple, getting things working, and then beginning to add all the customizations for a particular environment (multiple accounts, different forms of authentication, different load balancers, and configurations). That’s my biggest philosophy towards getting this working. 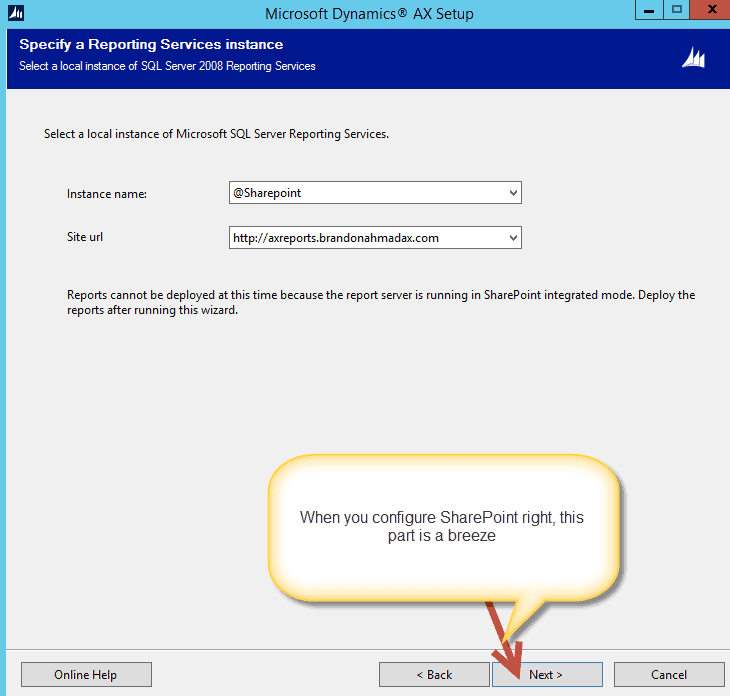 Fourth, ensure that you connect to your Dynamics AX database

Connect to the Dynamics AX transactional database in this case for the installation CD. 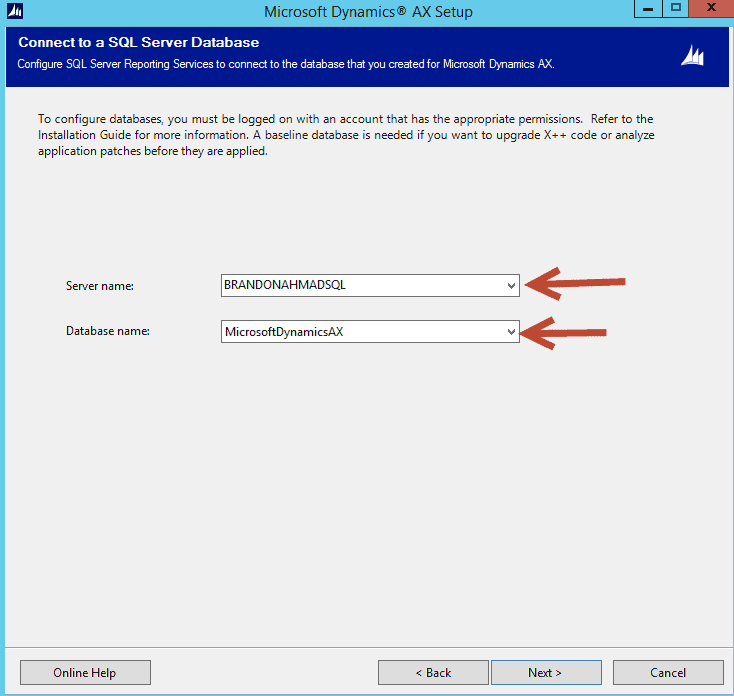 Fifth, keep following the options (basically clicking next) until you get the nice confirmation message

Keep following the options and if you followed what I wrote in the earlier posts, congratulations. You’ve opened up some serious Business Intelligence and Reporting Functionality in Dynamics AX while installing something that so few AX implementations currently have. 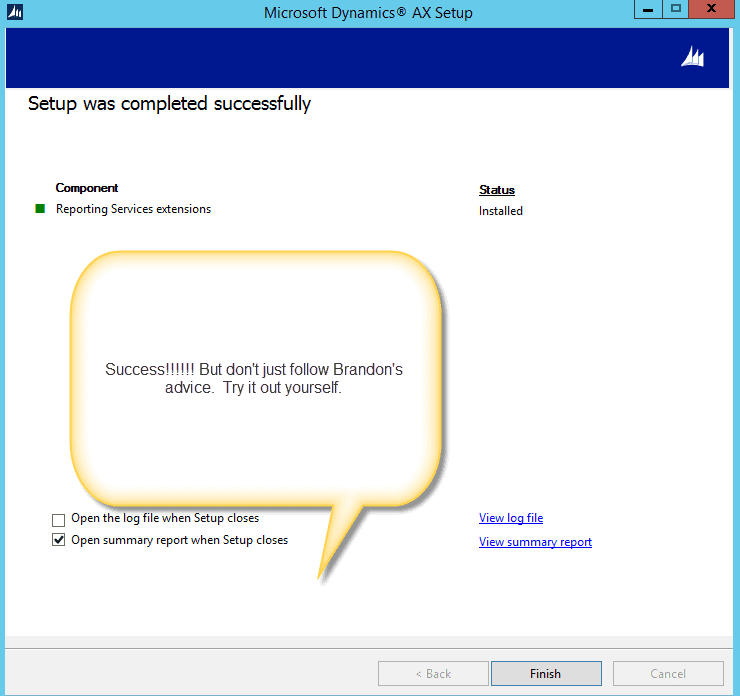 Sixth, configure AX to use this new super functionality

Open up the client. Go to System Administration à Setup à Reporting Services à Report Servers. Now, you need to configure AX to take advantage of all your work. 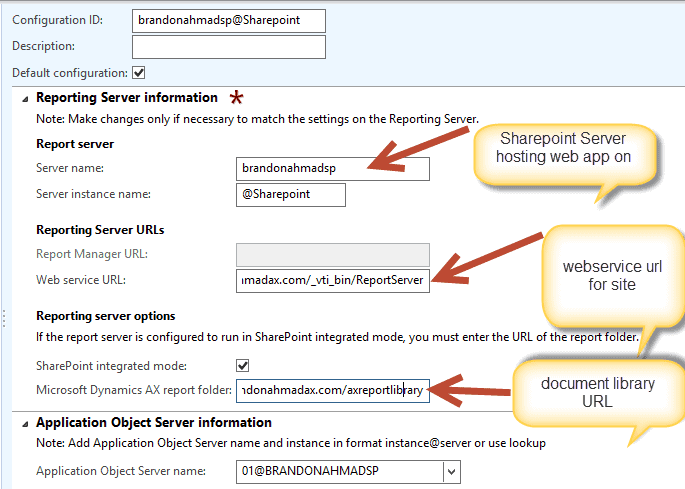 If you click on the Validate Settings option, you should see a confirmation similar to this one: 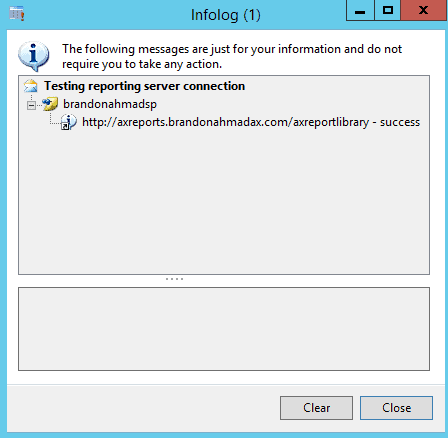 From the server that is running the Dynamics AX AOS Service (which you can easily verify by looking in the Services Console), open up Microsoft Dynamics AX Management Shell. 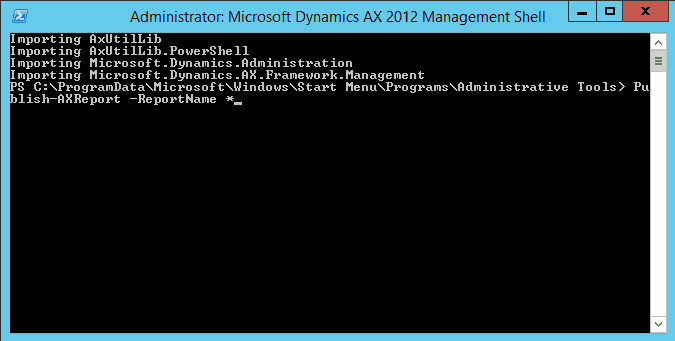 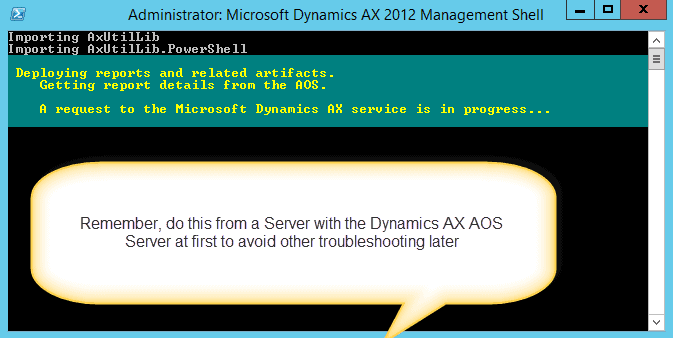 Eight, verify that the Dynamics AX Reports are actually there

If you have done things right, you will be able to browse to your SharePoint Report Library and see all the AX reports in there: 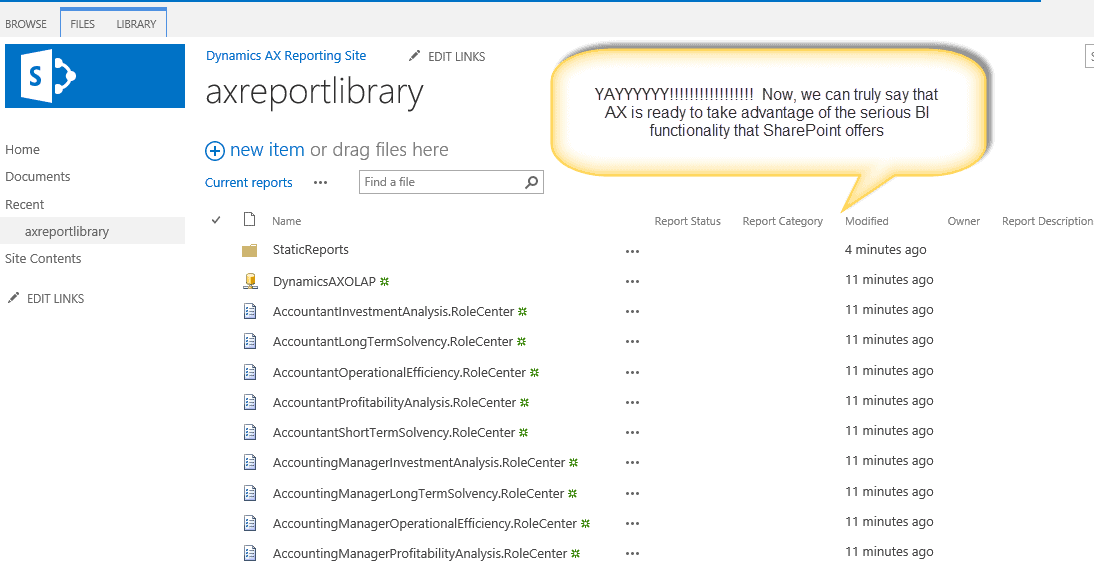 Finally, don’t forget to give all Dynamics AX users read permissions to the Report library or it won’t work

Oh yeah, and don’t forget to go into SharePoint, under the site settings, and add an active directory group that represents all Dynamics AX users to the visitors permission. Or else, users will have to run AX as an administrator to run reports (and that would be a big pain, especially if they don’t have administrator permissions to elevate to)!

3 Interesting side bits that you should know:

First, while completing this series, I had a power failure at my house that caused a temporary disruption to the SharePoint Service during AX report deployment. This caused 3 reports to fail deployment and I could not redeploy them through the powershell commandline. They were two reports in Japanese so they don’t affect the environment I was building, but I’ll look more closely at this when I have time – I want to make sure that the system is recoverable from errors during the deployment process.

Second, where do you place the report server configuration file in SharePoint implementations?

If you choose to install multiple different servers or farms, you should refresh/export your client configuration file, name it Microsoft.Dynamics.AX.ReportConfiguration.axc and place it in the following directory not mentioned anywhere in documentation:

And there it is. Basically, you need to export it to the drive where SharePoint is installed, following the ..Program FilesCommon FilesMicrosoft SharedWeb Server Extensions15WebServicesReportingBin

Third, don’t forget to map the Service Applications to the Reporting Web Application as that is the most common mistake in all of this 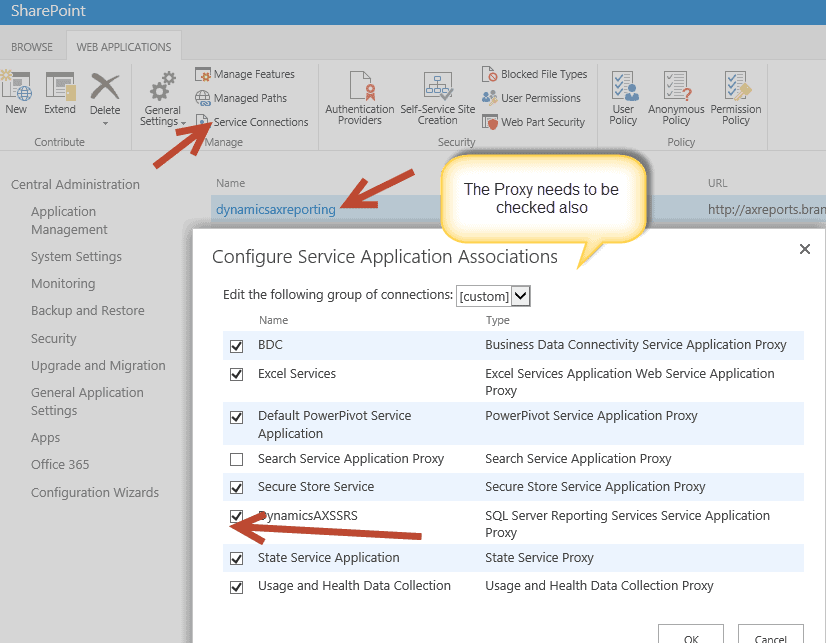 What a series. You now understand and have my baseline process and methods that you can use to integrate Dynamics AX and SharePoint. This really was just the beginning. As with everything else, getting the software installed and working is the first step. Letting the users understand and utilize that functionality is second – dashboards, report builder, versioning reports, feeding ax reports into other applications through web parts, ect. There are so many things that you can do with this. But this is a good start. It was a fun series. Stay tuned for more in the future, and I hope that all of you go out there and light up those implementations. Happy ‘axing!