Importance of Platform Update Methodology in Dynamics 365 for Operations

One issue that is important to understand is the difference between a platform update and a cumulative update in Dynamics 365 for Operations and Finance.  We were used to cumulative updates in previous versions of Dynamics AX, which were collections of hotfixes that were supposed to be independent of the hardware.  With Cumulative updates, you usually didn’t worry about upgrading other software components on the system (there were plenty of exceptions).

A platform update is a software update or group of updates that is dependent on the hardware and operating system or condition of the operating system or even other software on the system — perhaps a patched version of SQL or something.  So basically, what this means is that when Microsoft makes a new platform update, you must disregard your old machine and get a brand new machine to continue development. 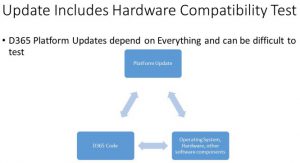 SAY WHAT?? — (the censored reaction when I told people about needing to ensure their code could operate on different machines for an update through testing)?

To make a long story short, this is why Microsoft is heavily pushing cloud, extensions, and whatever else.  The challenge here is to produce an interface where one can rapidly download new machines, bring their new code in to the machine, and just instantly use it.  This is obviously a serious work in progress.   Even Microsoft hasn’t achieved full compatibility of code between platform updates as it is very difficult to create unit tests that cover all versions of hardware and software in the future.  In fact, no major software company has achieved this.  But it’s an interesting challenge.

What does it mean for us with D365 Code Moves?  In practical terms, many organizations are struck on various platforms.  Testing platform updates has become like testing a major upgrade.  It’s the reason why there is a current lag.  For example, Microsoft recently went from Platform Update 8 to Platform update 11 in a little over a month.  It also means that when you think about an implementation, it’s wise to consider the platform version that you will implement.  They don’t all act the same and some platforms enable more functionality than other ones.  Extensions are only as good as the tests that are used to ensure compatibility.  So, organizations without advanced testing will be extremely vulnerable to problems when new platforms come out.

So, just a Heads Up..  Include a Rapid Machine Re-provisioning Strategy  when you plan for Code Migration in D365.  See everyone later.