Things were looking bad. Rather than running like a world class ERP application, AX seemed to be auditioning for a role for the longest slow motion action scene. The system was running out of memory(RAM). But it just didn’t make sense. The first reaction by the troubleshooting staff was to add more memory and processor. Then, Kernel updates, then AX updates, then uninstalls and reinstalls… Didn’t make a difference. What could it be? What was causing AX to run so slow? Why was this happening on multiple machines?

Don’t always trust what you see.

The first rule of troubleshooting AX in a cloud environment is to not always trust what you see or hear. Just because you hear that an environment has a bunch of RAM, doesn’t mean that AX has access to all of it.

My favorite tool of choice for this is RAMMAP from SysInternals. It basically looks at the RAM in the machine and maps it to applications showing you exactly how and where the physical Ram was used. So, I brought up RAMMAP and saw something like below. This isn’t exactly what I saw all that while ago, but I recently fixed a client who had the same exact issue on a Development machine in the cloud.

Can you see what was wrong? Drive locked means that even though a certain amount of Memory is available to the machine, a driver has taken a bunch of it. This is very common with printers or misconfigured virtual machines. In this case, it was a misconfigured virtual machine. If you click on the file details tab, it will show you who the culprit is. So, for example, in this example, the client had 16GB’s of RAM on the Development machine but 10 of it was being locked by the virtual machine. In reality, that only left a total of 6GB’s for the rest of the operating system (SQL, AX, everything). 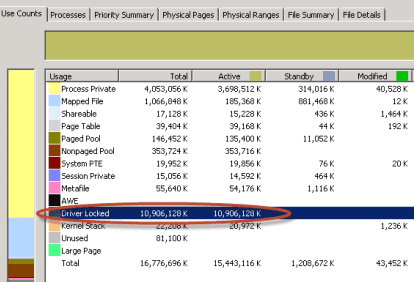 In the Case of the Client, the situation was far worse. Though the machine had 24GB’sof RAM, only 4GB’s were available. We corrected the poor virtual machine configurations and the machine ran faster. In other cases, watch out for universal print drivers. They love to steal memory from all the applications. Till next time…